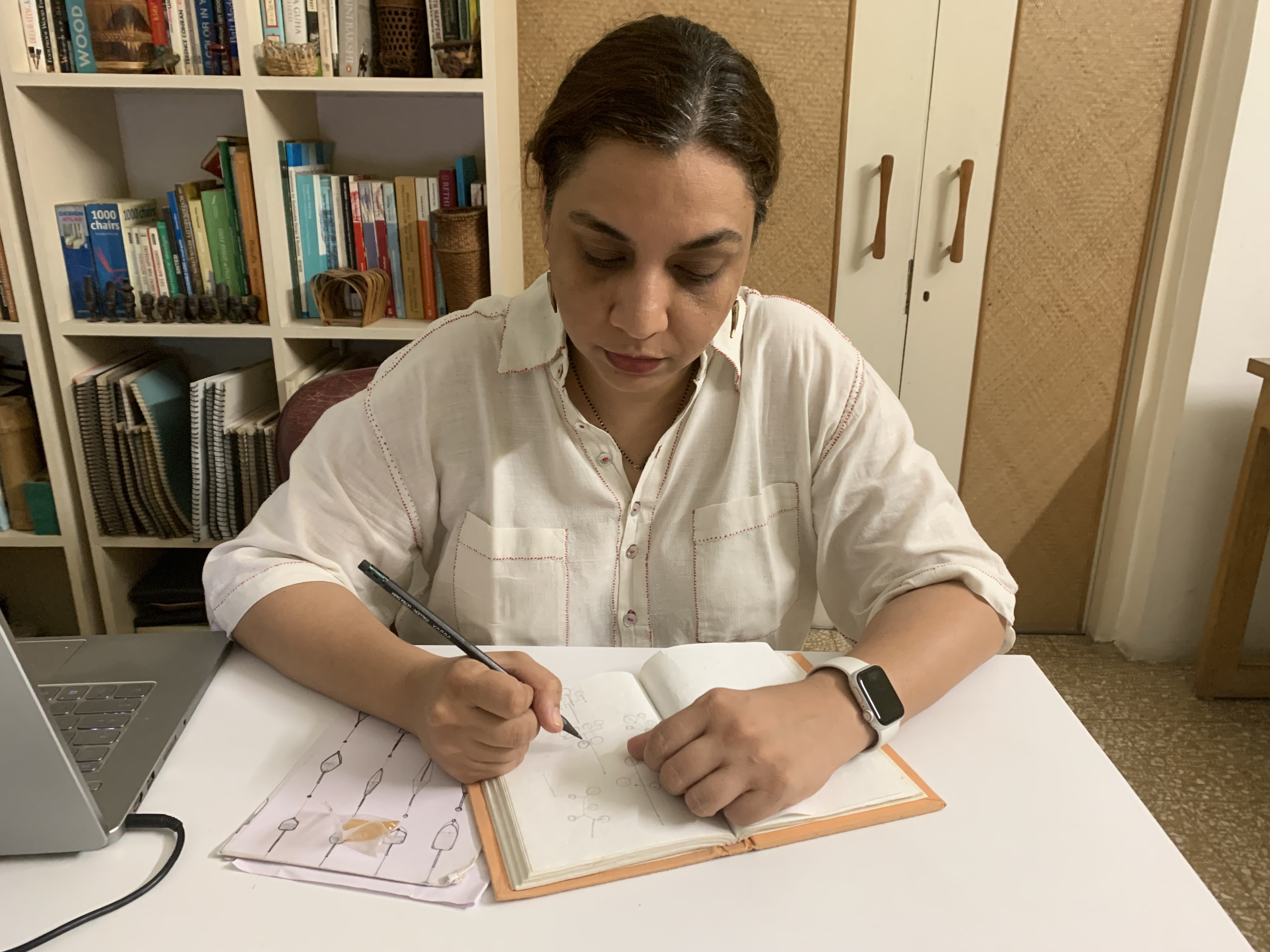 How do you feel about showcasing your work in one of the world’s most coveted events?

I’m very excited. We’re a really new brand, started in 2019, almost 2020 in the middle of the pandemic. To know that despite everything that’s happened with the market, our products are on different platforms is very special and we’re very excited about this. Not just because they’re designs, but sustainable designs and NYFW is one of the mainstream events. To know that sustainability has a place in fashion, which is so fast, is a very heartening feeling.

Can you tell us about yourself, your brand & your journey?

I studied accessory design in NIFT, 1995-98 which was many light years ago. Then I moved into hardcore duet nite design. I also worked extensively internationally but none of it was in jewellery. I’m also an academic, I’ve written a couple of books and done international projects. When I started working towards BAKA, everyone was like, the whole idea of me doing one more thing is quite insane because there are only 24 hours in a day. I guess at the time I didn’t know it couldn’t be done which is why I even dared to do it and that’s why we call the brand ‘Baka.’ Baka is Japanese for a fool. This is one of my favourite things because a fool did not know it’s impossible so she did it anyway!

Oh my god that’s incredible. I had no idea.

Yeah! So, Baka is also my pet name. My brother used to call me Baka when he was small because he couldn’t call me Rebecca. So it was kind of both these things. When we started Baka, it was a flirtatious venture, because we were doing such hardcore industrial designs for brands like Godrej and several UN institutions. I’ve spent three years working in Vietnam in the craft sector there. So after all of this working on your own jewellery line seemed almost frivolous and just something which should not be done. So I was very excited when I did it and it was very heartening to see the response. It was fun to reconnect with what I thought I would originally study and do with my life. That proved useful. Because everyone would be like how do you even know this about gemstones and I would say I’ve literally studied it for three years and then I left it far behind and did other stuff.

I guess it was meant to be then, huh?

Yeah, I think so

The origin of the brand name, the meaning behind it and the connection with your name—it’s such a beautiful story to tell.

Yeah, I mean it’s very personal. I’ve never kept my name along with anything. But, this was just so silly and impractical at the time, so I thought this deserves this.

I think you know, Vidhya as a woman after you’ve just competed in what’s a man’s world for the longest time—especially when I did my PhD on sustainability it was such a serious phase with engineers who were 6 feet 7 inches and so on. So to be a little Indian girl and doing a PhD in a predominantly male engineering college where all the big boys were. After I did my PhD I was like, enough of this, I don’t need to prove anything to anyone and have any more brownie points that I can have kids, and I can be a good mom and be a good daughter and still get to work on time. This was just such a rebellion towards all of those things, so I get to do whatever I want now—enough of this.

That’s so inspiring. I empathize. I cannot tell you how often without consciously realizing when I was younger, I’ve tried to prove a point—that a little brown girl can end up doing a lot more than you superficially judge a woman could to do. After a certain point though, you just realize you’ve got to do you and just push boundaries.

Such a resonance on this huh?

I do have a couple more questions. What are your inspirations for your designs, the pieces you’ve specifically chosen for the New York Fashion week?

This is from a collection called Tuscany and it is based on the revival of the Tuscan style by the colonialists. What is interesting for me is that history is connected, at some point. There’s a fine line between appropriating something and being inspired by it. The questions of consent, of permission, of where you draw the line—and I think all of these are all just lines in the sand that everyone has to navigate with a compass of their own conscience. So this was very important for us because instead of someone appropriating something of ours, it was me who is Indian, who is drawing inspiration from something that is the foundation of western civilization—like the Greco-Romans and all those things. I mean our entire parliamentary system is based on the laws they made in Rome. And, I just wanted to see how people would respond to this, and there was nobody who said anything about cultural appropriation. So, at some point, we need to think about playing the victim, about the need to play the victim, about looking at history without a chip on your shoulder. So, it was all of these undercurrents that led us to do that collection.

There’s a lot of conversation around this, and it’s interesting to step back and have a newer perspective.

How has your creative process and business been in the middle of a pandemic?

We’ve always been very frugal, we are essentially a hardcore sustainable design firm. We don’t want to design sustainable products, we want to design products that create and design sustainability in the whole world. We don’t look at just ecological aspects, we also look at social and cultural, ethical aspects. We’ve always been conscious of that. Now in the pandemic, we feel it more personally and deeply. For example, at some point, we made a call that we will make products that cost less, and when we use a precious material like silver, to make them lightweight. So how do we make them structurally sound for example? So, the ribs on the products are actually just small lines that have the integrity of the product structurally. It has impacted design and hiring. A lot of people are out of work and through word of mouth, they came to us because they’ve heard that they’ll be taken care of. So, there were so many people at our door saying, “Dhidhi hamme, kaam chahiye,” and I literally did not have that much work. So, we hired people during the pandemic not because we needed them, but they needed us, you know. And that led us to actually put in much more effort into marketing and photography to sustain, and sell. It’s impacted us end-to-end.

New York Fashion Week is a space where people showcase couture right? So they show one of a kind pieces or pieces that are naturally inclined towards being crafted. You know, because the craft is high value, low volume. So, I’m excited to see the way we in India look at it as something you see in street markets, which it’s a high volume, low-value kind of thing. So it’s great to see craft being positioned this way. I see a huge resonance between couture and craft. I’m really glad Dhanya is doing this.