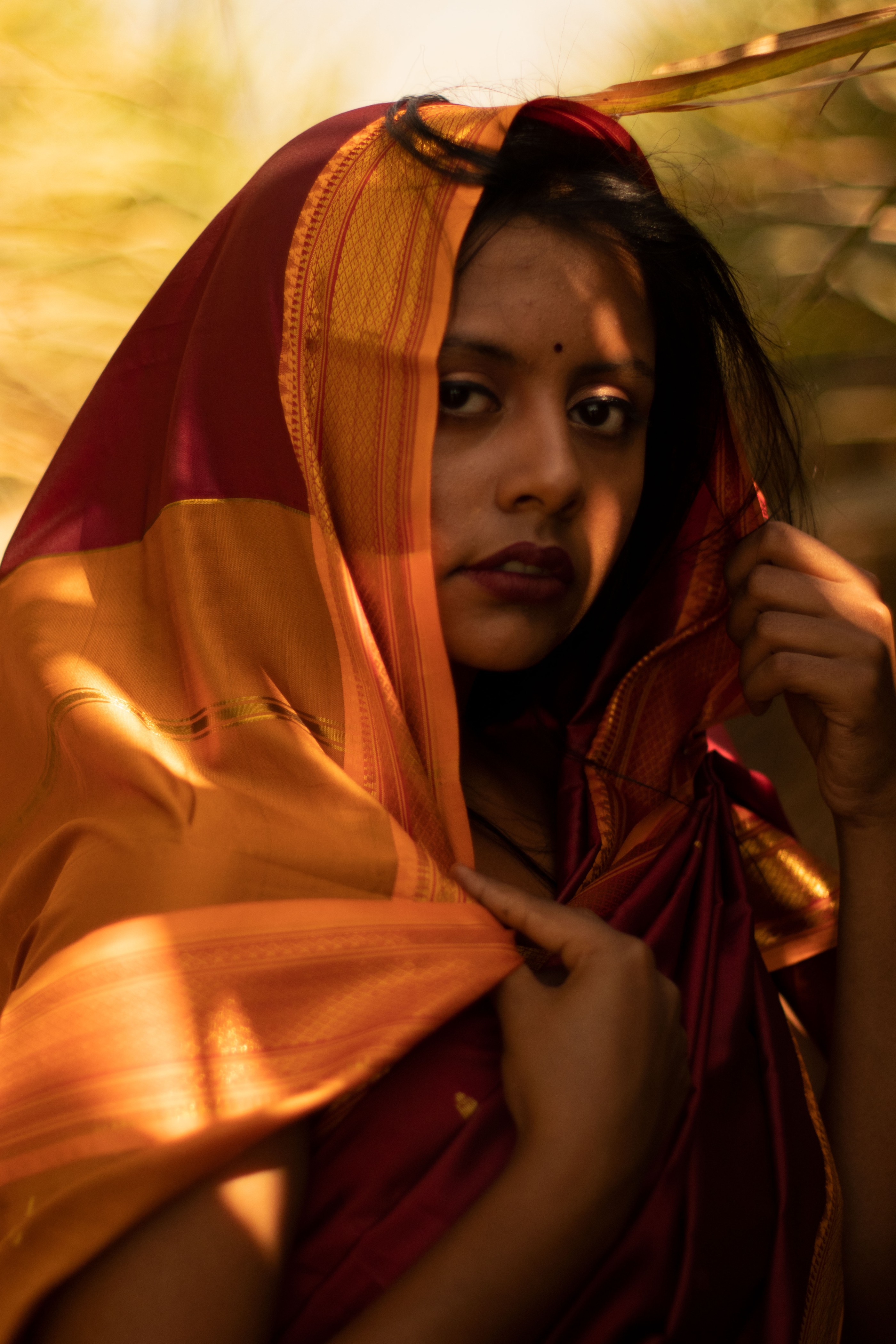 A mild wind susurrated in the night. The bare parts of my body,  the ones a flimsy black underwear or a blouse was not covering, tingled when the wind caressed it as I walked up to the steel almirah resting in the corner of the room. Tonight would be momentous, I could tell; not in the earth-shattering, history-altering kind of way, but in a subtler, more pivotal sense, like the breaking open of a seed shell to pave way for new life.

The November night was servile in her silence. She neither questioned my intentions, nor the purpose of my existence. For the first time in a long time, I could hear myself clearly, inhales and exhales rhythmically timed to my heartbeat, blood swirling through my veins from beneath the bars of my ribcage all the way up to my eardrums like a tribal throbbing, the gentle rat-a-tat of my feet against the cool ceramic tile - all coming together systematically into a private symphony that only I could experience.

When I threw it open, the almirah’s rusty hinges let loose an archaic creak, slicing into the nocturnal tranquility. I felt like there were prying eyes boring into my back, watching my every move, umpiring the sin I was about to commit.

At the store, Pati had promptly swatted away my hand as I had reached for the cerise saree. She was well aware of my motives; she was my grandmother after all. Do not mock the auspices of tradition, she had said, it is sacred, worn only on the occasion of holy communion. It marks a rite of passage. If you want it, you know what has to be done.

It was more the clout in her voice and the insinuation that it carried than my belief in tradition that had me recoiling instantly.

It had always been like this for us, my sister and I. We knew there were boundaries to be toed, rules to be followed- acquiescence without question. We were the cases in point of well-raised, obedient children, girls in particular, and we were expected to endorse with our behaviour.

To Akka, all of it came naturally. She was the torchbearer of our familial values- inherently docile, inquisitive but only to an extent considered virtuous and not meddlesome, intelligent but not enough to threaten the hierarchical hegemony of society, amicable in her ways, and rooted in her customs. She was respectable to her elders and thorough with her duties, the obvious trophy child. When required, as always, she stepped up to what was expected of her with no trouble at all.

Then, there was me.

To be fair, I tried. I tried with all my might to be the conformist they wanted me to be, to do as I was told. But oh, it was hard, so terribly hard.

Born on a purnima tithi, a full moon, I could not help but be an eclectic child. I was swayed by the pirouette of the earth, sucked in by the brackish tides, and was as moody as my city in the monsoons, a hard force to confine, harder to tame. I was constantly being pulled away by abstractions to pay much heed to their rulebook.

For this, I was chided, and chided often, for how could I defy the norm, how could I possibly not live up to their hopes?

Nonetheless, the heart wants what it wants. You can suppress its innate disposition only for so long before you must relent to it or let the core of yourself wither away. The latter was, in all earnestness, a folly; I refused to quash my spirit for the sake of social mores.

With slightly quivering fingers, I reached for the yellow cardboard box from amidst the pile of my clothes in the almirah, held together by a reedy string. Inside it lay the nine yards of a matrimonial ensemble indigenous to brides of my community. I had gone back to buy it a few days after Pati had left.

The fresh silk curled against my palms as I freed it from the confines of the box. The cardboard fell to the floor with a soft, symbolic thud.

This is not right. You were raised to be better than this. Have you no respect? I could almost hear their disapproval, crisp in my head.

But tonight was a purnima, a full moon night, and I had been coaxed into following my heart.

I held all nine yards of the saree in my arms, thinking back to the time when I was a child. I had often watched my mother drape the madisaar on occasions of festivity. The élan and grace with which she carried it off had instilled the love for it in me, and ever since, I had imagined wearing it myself. Yet, the stipulation that it came with was unacceptable to me.

But at this very moment, without further contemplation, I stood in front of the full-length mirror and wound the long fabric in a traditional madisaar around myself.

Draping the madisaar is no ordinary feat. Yet, with every complex twist and tuck of the saree, I felt the years of attempted curbing begin to unravel- uncoiling itself threadbare from my veins, my bones, the core of my being. In its place, a sense of individuality began to swell. I wrapped the silk twice around myself, pleated and tucked, pulled the cloth from between my legs, pleated again, and secured the pallu in its place. Smoothing out the madisaar, I smiled triumphantly at the herculean task achieved, admiring the snug way in which the saree sat on my hips.

The sense of liberation grew in me. I gave in to the euphoria of the moment. I had wanted so long to do this but their admonition had reeled me in. Like everything else.

Reaching for the metti, the silver toe rings, I slipped one onto the second toe of each foot.

Then, I went for the hair. Parting it down the middle, I braided it all the way down to the ends. Finally, I removed the box containing the sindooram, the vermillion from powdered cinnabar that complimented my madisaar. It would put the final touches to my intended undertaking. With a pounding heart, I tuned out any residual qualms bubbling within me and in a quick, swift swipe, I coloured the parting on my head bloody. Lastly, I dotted a red circle on my forehead.

And just like that, in the unearthly hours of that November night with no one but the orange moon as witness, I made an irrevocable commitment to myself. In a few hours from now, the city would learn of my nuptial vow, but for now, I could rejoice with no contention. 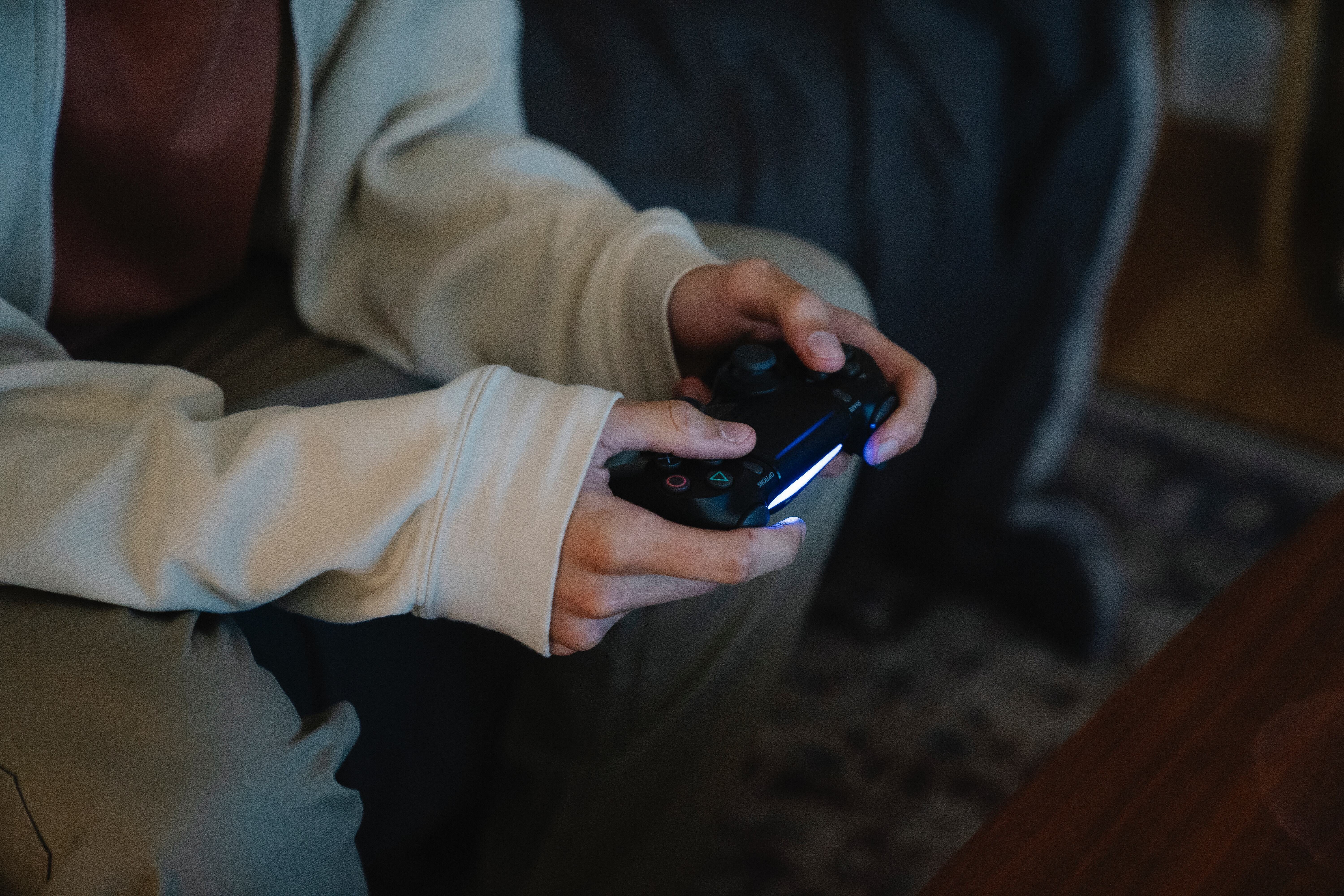 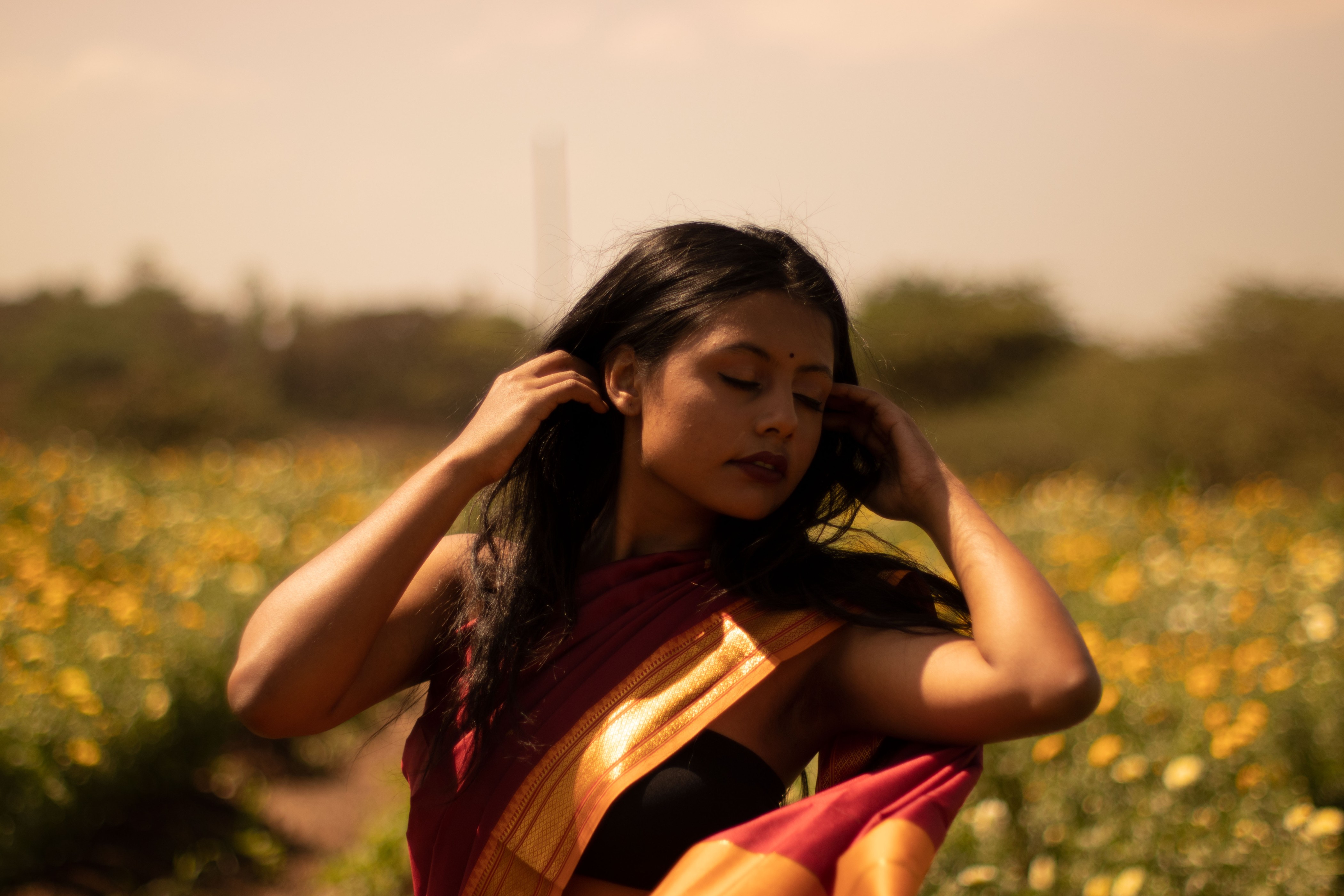 By
By Aashika Suresh