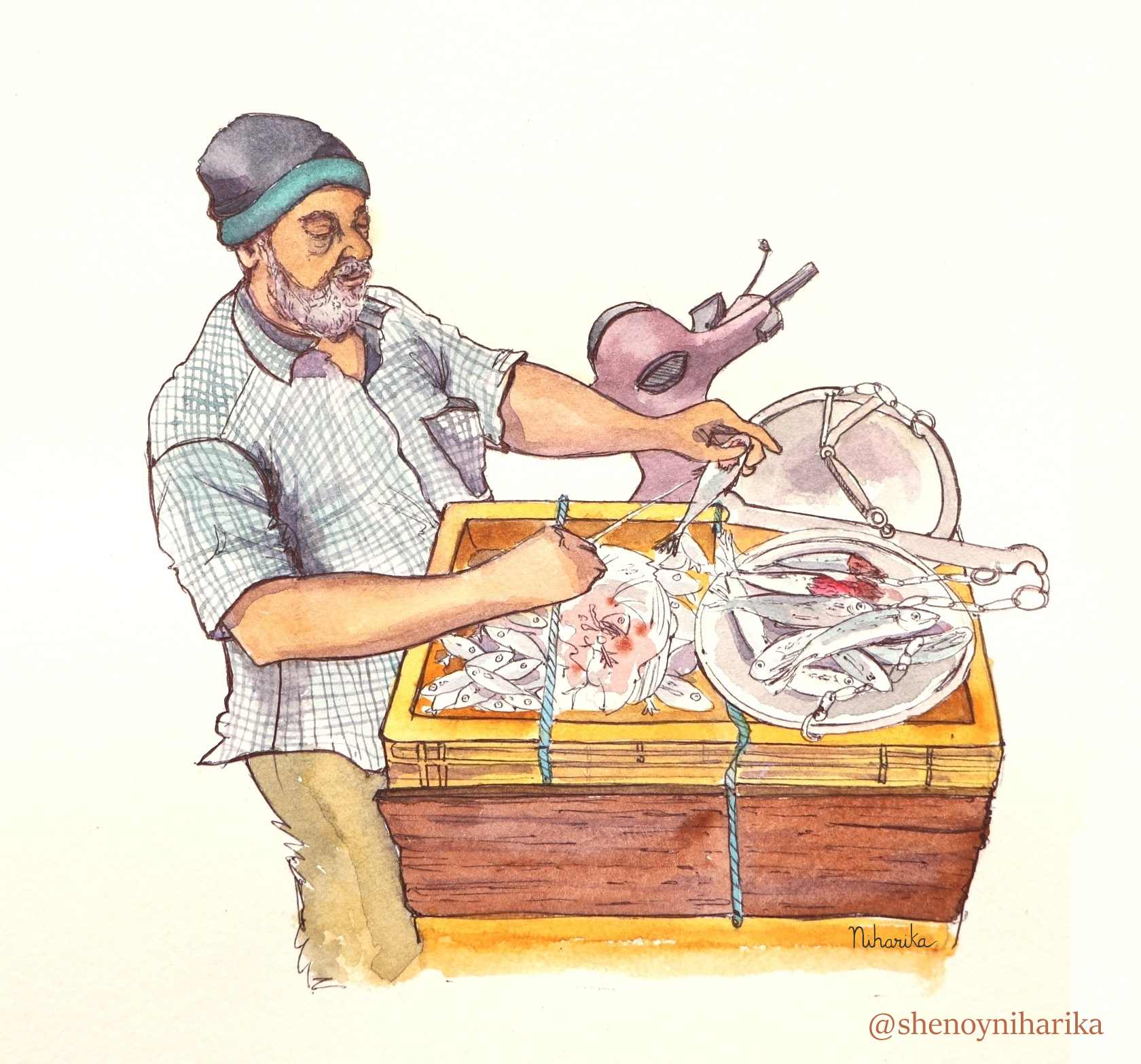 This is Fayyaz. Every morning my mother glances out of the window from our 6th floor apartment, and on the days he is spotted, in between the dense leaves of the copper pod tree, there is a special gleam in her eye as she says, ‘Shall we get some fish?’

My father then calls him to ask him what is available. My mother and I go down with a steel dish, and a lid. Cut fish doesn’t make for a savoury sight, not even among fish-eaters.

His Moped with its crate of fish announces itself by smell before sight. Some call it stench, some call it fragrance - make of that what you will. A worn out piece of wooden plank is his makeshift chopping board, as he expertly guts the fish, removes the scales and chops them into pieces. Comfortably standing against the scooter that looks ready to topple the minute he shifts his weight, he rattles off the names of the seafood he has in his crate to customers that surround him - Bolinjei, Tisri, Madumagalu,Matthi,Bangude, Chemmeen. He knows Kannada, Malayalam, Tamil and Marathi names of most of them.

He is a showman, on par with any sushi chef, flamboyantly tossing the fish into the weighing scales. On a busy day, the weighing scales are a sight to behold – covered with layers of muck and fish innards, one wonders if they despair of ever being cleaned!

Fayyaz has been in the fish-selling business for the past 30 years. He used to sell fish on a pushcart in Russell Market, but every time he made a trip to the market to restock, he would find his supply stolen! On the day his weighing scales got pinched, he decided enough was enough, and shifted to selling fish to apartment complexes and houses on a cycle, saving enough to buy a Moped.

A typical day looks something like this – Buy fish on credit from K R Market early in the morning. By 7:30, go to different apartments and sell fish. It’s not a wholly satisfactory arrangement because the rate of the fish is finalised only at noon. Sometimes, he has had to bear losses because the vendors would have charged more, when he returns to pay the daily earnings.

He says, “I have been working honestly these 30 years, madam. I am happy with what I have got. If I don’t come for two or three days, my customers call me and ask, “What happened? Is everything alright?” Thanks to Allah mian, there is no dearth of anything. I don’t have any loans…We have a small house that we own.”

Fayyaz admits that he cleans fish when customers demand it, for a little extra money. “The fish waste is taken by people who stay in the IAS colony. They say that they use it as compost, madam. They have such big houses. Lots of space, madam.”

In these days of online grocery shopping and food delivery right at the doorstep, at a mere click, it feels good to see Fayyaz thrive. Surely, the competition must be high, but as long as there are loyal customers who often ask after his health and worry when he doesn’t show up – things should be alright. Small businesses are just as important, if not more, as big brands and supply chains.