Jai Bhim Review: A realistic legal drama that is not preachy

Dr B.R. Ambedkar said that “Indifferentism is the worst kind of disease that can infect a people.” Still relevant, if not more today, Jai Bhim comments on the very dangers of caste-based oppression and apathy. T.J. Gnanavel’s Jai Bhim rises above the urge for heroism and the need to preach right from wrong in brash, in-your-face dialogues. But that’s not what makes this a powerful courtroom drama. Jai Bhim tells us a story that needs telling often, like the constant reminders of horrors in our history but with empathy, a kinder and fiercer heart with a note to never, ever forget.

The film premises with Sengani (Lijomol Jose), the protagonist—from the Irular tribal community— fighting an almost impossible legal battle with the help of social activist-lawyer Chandru (Suriya) to get justice for her husband Rajakannu (Manikandan) who had been subject to physical custodial torture by the police and goes missing. Based on true events that unfolded in a legal battle in 1993, Jai Bhim recounts a story of caste-based oppression without watering down the realities of it. Consider the opening scene where a policeman is found asking prisoners completing their sentences being released, which caste they belong to as a segregation method to file new fake charges on them.

The film takes a good amount of screen time to delve into the livelihoods of the Irular tribe, while consistently remarking on the everyday caste-based insults they are subject to. A comment by a dominant caste member, “Unnala ooru kulla vittadhe thappu,” (big mistake letting you in the village), is only one of many. I’d be remiss if I didn’t mention that Jai Bhim in some parts of its narrative reminded me of other films such as Visaranai, Asuran and Karnan.

From the comforts and privileges of our living rooms, it can be easy to call out the amplification of sentiments and struggles seen in T.J. Gnanavel’s film-making style. But is it too far from reality to show the raw violence of custodial torture? If anything, the loud cries of Oppari as is, by the Irular tribal women watching their community suffer seems more than appropriate for the kind of story the film portrays. To a large extent, Jai Bhim refuses to shy away from dialogues and scenes that are tempered to make it an easy watch. It is not.

The details of caste-based oppression against the Irular tribe are meticulously but seamlessly woven into the narrative. In a scene, Rajakannu is rudely dismissed by a lady from a dominant caste when he casually and amicably mentions she’s from his village. In another, the irony is not lost when Rajakannu muses over his inability to own a stone-built house, made of bricks although he is a brick-maker. Jai Bhim navigates the nuances of systemic caste-based oppression that is directly interconnected to the social, economic and cultural livelihood of the Irulars.

There is a moment in the film when Sengani defies an attempt by police officers to drop the case. Right after she is found walking home with her head held high in defiance (a performance complemented by Sean Roldan’s riveting music, as is the rest of the film). You can tell it is a long, drawn-out indulgence of a scene, a “mass” scene if I may, placed strategically to show us this is a woman that will go to the ends of the world for her husband. All with the help of Chandru, the lawyer of course. While Suriya does borderline on being the saviour that Sengani desperately needs to save her husband and her family, his honest performance draws away from his innate stardom and instead focuses on the details of the courtroom drama, and justice for Sengani’s husband. Every performance is genuine, wins your heart and inspires. As for clichés, the film thankfully spares us a romantic relationship between Chandru and Maithra (Rajisha Vijayan). However, the battle between good and evil in an almost too direct projection that every character must be “good,” or “bad,” is a cliché that has managed to stick around.

Jai Bhim is rich in visual imagery. Rajakannu getting dragged back into a dark void of the prison doorway by a police officer is haunting, to say the least. The depiction of the prison as a closed, rising, never-ending space in custodial torture scenes is intimidating. The film also navigates the obvious indifference to injustice in realistic yet intense storytelling. Jai Bhim is well-edited—the screenplay is decisive and compelling as it unravels important truths cohesively. To take a real-life occurrence and turn it into a story while also keeping up with the documentary-like facts that surface in the courtroom is a well-struck balance. ‍

Jai Bhim to me is more heart than mind although the latter is well-addressed. It’s a film that proves it is possible to cast a star like Suriya and still stay true to the story— all it takes is a grounded performance. This film conveys that empowerment can come in many forms, through education as seen in Chandru, the lawyer and through a sense of self-respect no matter how hard the world fights against you, as seen in Sengani, our protagonist when she refuses to be paid off to drop the case.

In the end, despite the fine performances and incisive story-telling, if the obvious bluntness of this film’s dialogues such as that of a dominant caste leader, Unga kudusaiya kollutha evalavu neram aagum,” (how long will it take to burn your huts down) in an attempt to scare Sengani to withdraw her legal battle seems too conspicuous, perhaps it’s time to believe that is the reality of it.  ‍

Jai Bhim is pivotal—a work of hope that will ask us to challenge the impossible, a pointed nudge that we must know better than our indifferences. Jai Bhim is timeless. 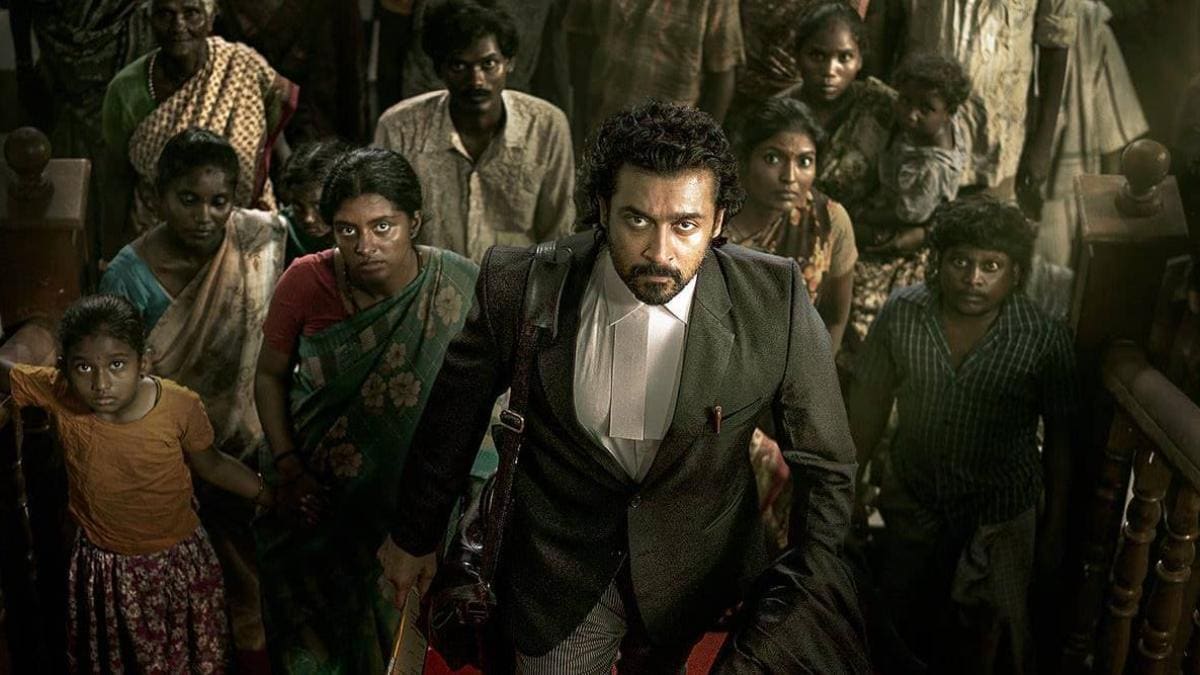 Jai Bhim Review: A realistic legal drama that is not preachy