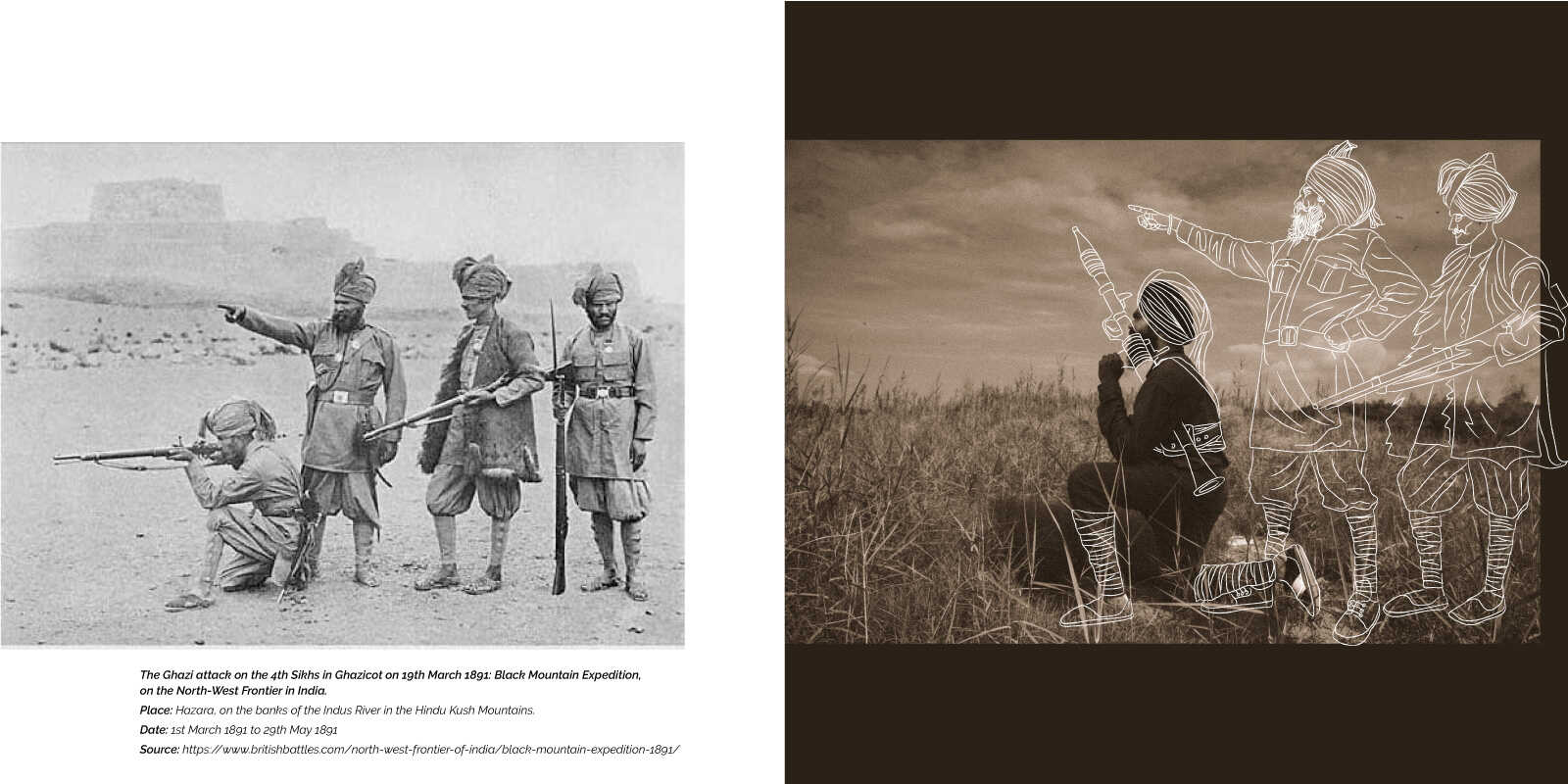 Sepoy is a collaborative project to show respect, tribute & honor the sacrifice of all the Sikh soldiers who fought in WWl, WW2, Kargil, and other historical wards. The project was released on the Saragarhi Day (12th September), remembering the heroic story of 21 ‘Dauntless’ Sikh  Soldiers who stood and fought against 10,000 Afghan warriors to defend the fort of Saragarhi.  Their exceptional story of bravery during the 1987 Battle of Saragarhi marked a significant  presence in military history.

When talking about the collaboration, the photographs created are an aesthetic example of a  joint artistic effort that involves a doodle artist, a photographer, and a model who introduced the  concept. The idea is to create exceptional art by collaborating with an open mind with fellow  artists to encourage mutual respect and admiration.

We owe a large part of our existence today to the sacrifice of the Sikh soldiers martyred in various past battles. The pride we feel about our turbans today is because of the value, dignity  & respect that they built for it. The history of Sikhs is filled with stories reflecting their dauntless  courage, I would like to share a story from history that I read:

The Sikhs of the 25th MT Coy of RIASC (present-day ASC - Army Supply Corps), after their arrival in Egypt, troops, including Sikhs, were issued steel helmets and were ordered to wear these instead of turbans. Major Shirton tried to convince them but Sikh soldiers refused to touch helmets & said:

"You may take off my head, not my turban."

Sikhs have sacrificed their lives multiple times for the sake of the Turban - "For Sikhs, the turban  was made mandatory by Guru Gobind Singh, who singularly excluded wearing of any other  headgear except the turban."

Through this project, we captured photos of a present-day Sikh while keeping in mind a set of  shortlisted images from history of Sikhs for each photo clicked and recreated that scene/era in  our photo through doodling. The shots reflect the situations that these brave and courageous  heroes lived through to help us connect more intimately with the past through its stories and  culture.

Hence, reflecting how every artist can beautifully document human history to express emotions  and tell stories. Similarly, each one of us is wired to a certain source of inspiration - be it a  place, history, community, story, or a person that helps us take the role of a creative contributor

through our piece of art. The same way, our concept originated from the connection I feel with  the Sikh community which inspires my way through every content we create.