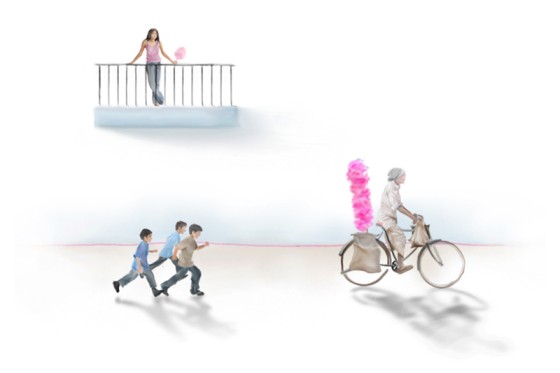 I heard the familiar bell being rung and ran downstairs. The old man stood waiting in his old place with the usual half kg of white cotton candy packed for me. His toothless smile was as familiar as the way home after a long tiring day.

When you think of a person eagerly running for candy floss you may picture a kid or an adolescent at most, but I am 25.

I used to buy candy everyday because I loved it when I was a kid. All my neighbouring kids used to flock the old man to take his candy. As the man's hair became gray and his dress more shabby and his familiar cycle rusted and the tin with the candy started becoming green, the years passed by. His customers decreased because they were all growing up. Gradually, it was just my brother and I. We too became busy with our studies, our games and friends but the old man stuck to his time.He rang the same bell for 20 years and looked at us with hope that we may buy candy.

Street vendors became rare and kids were eager to buy chocolates and burgers these days.Cotton candy, available in malls at an expensive rate, is often preferred over that of the candy man’s.

Selling candy is his life, his only source of income. He rode the cycle for 10 kms to sell 10kgs of candy in a day and eat some meagre supper. As I grew up, I used to buy his candy occasionally out of nostalgia. Maybe for him I was still the kid who always bought his candy. Once I noticed that he was wearing the same shirt for so many days in a row. I tried to persuade him to take some extra money, but he was adamant and declined. He stuck to his price until the end, and was determined to feed his family with whatever he earned.

He worked for 50 years, but I never once heard him complain. I remember not buying candy for months at a stretch, and when I finally went to him after a year, he smiled at me in his familiar way and asked, "Did you forget me, amma?" I had tears in my eyes. So much integrity and fondness and such astounding loyalty just because I bought his candy. I couldn't help myself. I bought a large amount of candy just to give him more money and distributed it to everyone. He went away looking genuinely pleased on selling a big quantity and earning some profit for that day.

I sat wondering what a strange thing life is.The candy man, though uneducated, had taught me a great lesson - that to be content is to be happy. Even when his clothes were torn and his limbs became arthritic, he worked to his full potential and felt happy with his meagre income. He did what he knew and led an honorable life, unwilling to accept help. At some point in life, the candy man became my friend and even an inspiration. But still I never asked for his name or where he lived. And these days I hardly see him around anymore. Maybe it is true that we understand the value of things only after they are long gone.