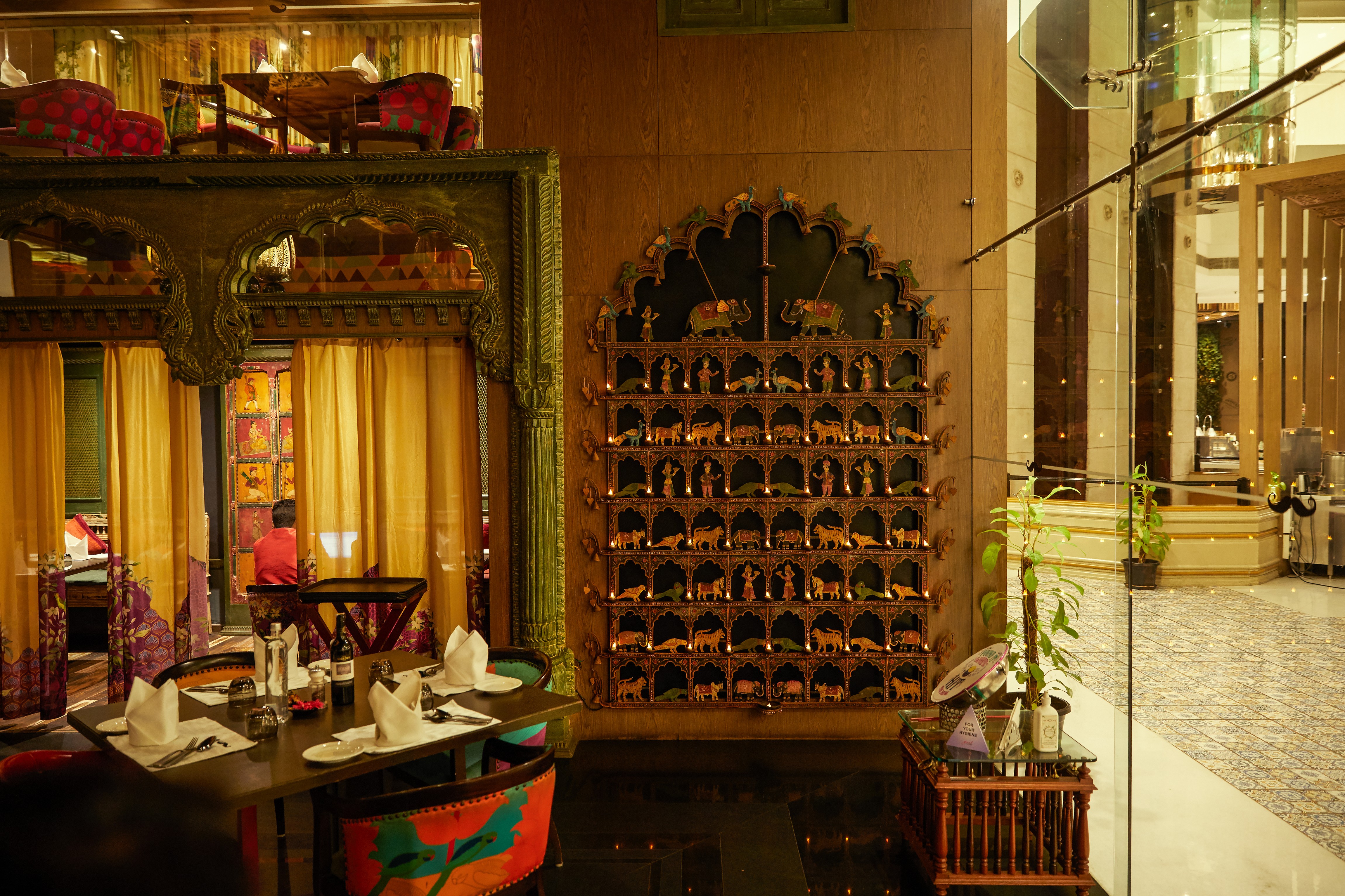 In many ways, millennials are presented with a plethora of opportunities to explore, find and experience a well-made meal in a restaurant. I, too, visit a restaurant nine out of ten times because an aesthetic image of the eatery caught my eye on my Instagram feed. I am intrigued by the reviews, the enticing images and is tempted to taste it. I simply can’t help but wonder what went on on the other side, in the minds of the restaurateurs who curate such visually appealing theatrical experiences.

It was business as usual at GRT Grand in T Nagar when we arrived. I couldn’t help but be fascinated by the polychromatic display of origami birds hanging from the ceiling of the lobby that led me into J Hind. A colourful world of its own with quirky Krsna Mehta prints festooning its furniture and walls in striking colours, J Hind is your quintessential fusion Indian restaurant with the ambience of a quiet, alluring home. The restaurant was bustling with cheerful staff serving a spread of Indian flavours with molecular gastronomy infused theatrical performances. Our eyes and palates were treated to a jumble of crowd pleasers so very elegantly plated.

Here is a vivid description of the colours we saw and the tastes we experienced:

My narration will not be complete without describing my repartee with the Amuse Bouche. Our minds are accustomed to associating bright shades of yellow and red to fun foods like desserts and chefs have used those very perceptions that we have about colours, shapes and textures to curate mind boggling eating experiences for us. We were presented with what looked like a mini creamy custard tart with fruit caviar and a glass of payasam. To my surprise, my first bite revealed that the Amuse Bouche was in fact an all savoury platter with a nut brown ragi tart filled with a yellow Paruppu Espuma, white honey caviar nestled in a red rose petal and a glass of Sambaram, a Kerala style spiced buttermilk. That was chromatic gustation at its best.

I later sat down for a quick chat with Chef Seetharam Prasad who is the mastermind behind the innovative J Hind kitchen. He vocalized that Indian cuisine is one of the finest in the world with the most distinct flavour profiles. However, the fact that this glorious cuisine has never really been under the spotlight it deserved for its lack of eye-catching presentation is amusing. In a pursuit to turn things around for this vibrant, colourful cuisine that had so much to offer, he embarked on a journey across India and abroad, to understand how restaurants had leveraged the Indian cuisine using western techniques to make the food more appealing because he firmly believes in chromatic gustation and that “the eye eats first, followed by the smell picked up by the nose and that the actual taste of the dish comes in last.” The menu of J Hind was designed to westernise the plating of Indian flavors by employing molecular gastronomy and recipe deconstruction tactics whilst letting his creativity flow free. For instance, he spoke to me about how he used silicon moulds used to make chocolates, to steam idlis and a colourful range of four different kinds of podi idlis shaped like doughnuts or about another time where they deconstructed a south Indian fish curry and constructed it in front of guests.

After a delectable meal and an even more appealing conversation, I left J Hind with a sense of satisfaction - the sign of not just good food but also some amazing service. The colourful collaboration indeed was an experience of a kind.